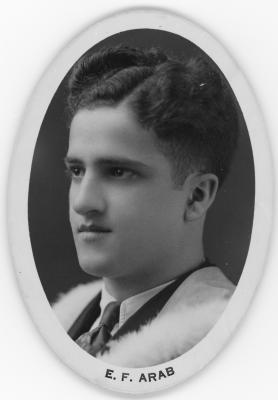 Lieutenant Edward Francis Arab was born September 6, 1915 to Sadie (born Senora Asaff Habib) and Louis Arab in Halifax, Nova Scotia, the eldest of five children. Louis immigrated as a child with his family from Diman, Lebanon during Ottoman Rule, looking for a better life. It is because of this that many families from the village of Diman chose to settle in Nova Scotia and their descendants continue to live here today.

Edward attended Saint Patrick’s Boys’ School and in 1931, at the age of 16, he joined the Canadian Officer’s Training Corp (COTC), based out of Dalhousie University. He went on to earn a Bachelor of Arts from Dalhousie University in 1935. In 1937 he graduated, with honours, from the Dalhousie Law School.

Following his graduation, Edward was approached by an established Halifax law firm; however, he decided to open his own practice. He quickly gained a reputation for accepting cases that addressed issues of prejudice and racism.

Edward was proud of his Lebanese heritage, spoke Arabic and helped in 1938 to found, the Canadian Lebanon Society, serving as their first President. The Society continues today to share and celebrate Lebanese heritage and culture.

In the summer of 1942, he volunteered for active service and was assigned to the Lincoln and Welland Regiment, a part of the Canadian Infantry Corps where he participated in two years of training.

Allied forces had landed on the beaches of occupied France starting with the famed D- Day Invasion on June 6, 1944 and was the start of weeks of intense fighting.

Throughout the Fall, Allied forces made their way north, along the French coast, through Belgium and finally pushing into the Netherlands. Part of the Allied goal was to retake shipping routes which were crucial to getting supplies to Allied forces and the people of Northwest Europe. Edward arrived in France on September 3, 1944 and quickly joined in this effort.

The Scheldt Estuary is a river that runs from France to the North Sea through the Netherlands and was a vital shipping route. It was heavily fortified by the Germans and the battle to take it was fierce. On October 24, 1944 Allied forces moved towards the Dutch town of Bergen op Zoom. Lieutenant Edward Francis Arab was killed here on October 25, 1944, with other members of his regiment as they moved to liberate the town. The Germans were finally pushed out of Bergen op Zoom on October 30, 1944. The Battle of the Scheldt lasted from October 2 to November 8, 1944.

The Allies took the Scheldt, at a cost of almost 13,000 casualties (nearly half were Canadians). Among the dead were Edward and members of his regiment. They are buried side-by-side in the Bergen op Zoom Canadian War Cemetery. His family was heartbroken at the news of the loss, which they received via telegram to his mother Sadie.

His life and contributions were celebrated in 1949 through the naming of a street in his honour. Edward Arab Avenue is in the Westmount area of Halifax.